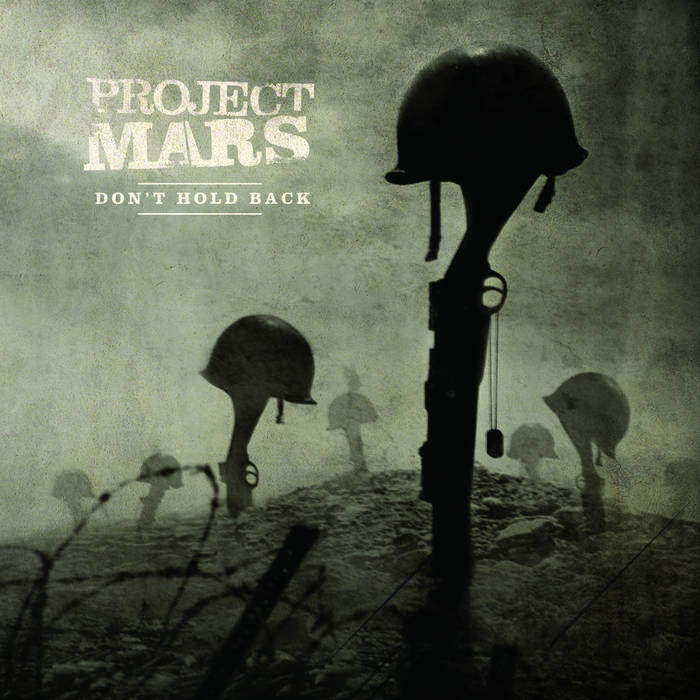 “Don’t Hold Back, wears the band’s trademark heart on its sleeve.” – Ottawa Xpress

“the very first track, “Push’N”, immediately grabs you by the balls setting the tone for the rest of this six song EP. This tune is super riff-driven and powerful as hell, especially when cranked up! I had to hear more.” – PureGrainAudio.com

“Polished, powerful, beautifully crafted hard rock the way it was meant to be played. The guitar work on this EP is outstanding and the first track in particular, “Push’N” is Canadian hard rock at its finest. We also have some great sounds coming out of the group’s song “Break Down (The Walls)”, which I highly recommend for anyone who is looking for some motivation in their day. Listen to this before you head out to work and you’ll believe you can accomplish anything!” – WeLoveMetal.com

“When you first listen to Don’t Hold Back by Project Mars, Crack A Beer, Put Don’t Hold Back in Stereo, Turn Volume to 10, Hit Play and hold the fuck on…Project Mars waste no time at all before they are tearing it up with “Push’N”. Right away in the intro they nail your ears with a heavy mad mix of Hard Rock/ Metal guitar riffs…“Hey!” if there is ever a song that is going to get a band noticed by anyone then this song has that written all over it. Man, all I can think about during in this song is the crowd fist pumping and chanting “Hey!” with Project Mars.” – KingstonMusicReviews.ca

“The EP is a big ol’ slab of hard-edged Rock and Roll that would find itself very welcome on major summer stadium tours. It’s got big guitars, tough guy vocals, plenty of breakdowns, and a driving rhythm section that never lets up.” – ColPop

“To compare them to more well known bands, they have a Theory of a Deadman/Shinedown/Alice in Chains sound to them. Definitely worth checking out!” – InkedAngels.net

“This is a debut EP that has massive appeal and potential, watch this space; Project Mars are certainly ones to watch and ‘Don’t Hold Back’ flows with a ease and quality on par with many multi-million album selling bands.” – Rawnervew Zine

“Don’t Hold Back is the first release from Project Mars and these guys are ready to take their place on the scene, they cleraly demonstrate it with this powerful beast…original material with interesting songs that should be played again and again. ” – WTFMetalMusic.com

“Project Mars’ sound is classic; it’s just good old fashion rock n’ roll, delivered with the sort of technical punch, which is what it takes to stand out in today’s hard rock scene.” – Screamer Magazine

“The vocals of Ron Henry highlight a band that puts heart in their music. They are going an extra step when it’s just as easy to bow down and sing about cocaine. I appreciate their passion and most importantly I appreciate their sound!” – WeLoveMetal.com

“One of the perks of this job is being able to listen to the newcomers to the rock genre, and to see how a potential game-changing force got its start. That’s how we felt when we received the band Project Mars first EP, titled ‘Don’t Hold Back.’ Featuring a steady hard rock feel that takes modern rock up three notches, the six-track album is a testament to the emerging talent that is making its way to the rock and roll world…Project Mars has, in a sense, projected the kind of music that can kick your ass out of bed in the morning and drive you to achieve your goals. With such songs as ‘Push’N,’ ‘Hey!,’ and ‘Break Down (The Walls),’ this album is unique in every sense of the word. ” – Rock On Request Magazine

“Project Mars sound really good as a modern hard rock band. They effortlessly blend their heavier rock with melody and clever hooks as on Push’N, Right to Know, and Hey!.” – DangerDog.com

“Infectious melodies and ready-for-the-radio grooves that could hold their own with any of the more popular bands heard over the airwaves, and even leave most em in their dust. Tons of attitude and swagger, some cool riffs here and there, soulful vocals and lots-o-cowbell (never enough cowbell).” – Ear Munchies

““Don’t Hold Back” is six songs (20 minutes of music) that kick metal ass from start to finish. I have spun this release numerous times and it just keeps getting better and better. The music is fun, direct and easy to listen to. Each and every track on this EP has hooks a plenty and they stick into your brain and dance there until you’re forced to go back and listen to the CD again.

This Canadian band is a shining example of what a metal act should sound like. I look forward to hearing more from this band in in the very near future.” – RoughEdge.com