Odium - No Way Out 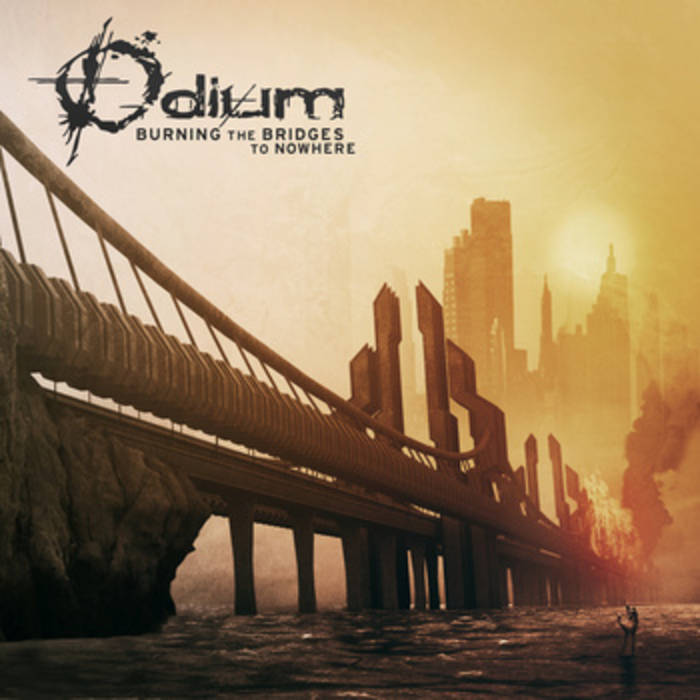 track from their album 'Burning The Bridges To Nowhere' released April 24, 2012 on Year of The Sun Records.

“It is clear that Odium knows how to be heavy and they utilize it exactly where it is most needed…This album is perfect for those who want to take a step back from the unrelenting aggression of many metal bands out there and appreciate that beauty and anger can harmonize.” – TheNewReview.net

“Melodic and brutal, the music of Odium’s sophomore album is nothing less than one of the most technically precise Metal albums it has been my pleasure to listen to….The songs of ‘Burning the Bridges’ are spectacular; a mix of brutality and poetry; songs like “Blue Channel” and “Viral by Nature” are among my favorites, on a disc loaded with powerful standout material. Like Metal? Get this. Odium: Burning the Bridges to Nowhere – 9/10″ – Confront Magazine

“Loud and fast but also melodic and complex, fan of acts like Killswitch Engage and Lamb of God will not be disappointed.” – London Metro News

“If you have any appreciation technically brilliant, intelligent and mature, massively heavy modern metal then do not miss out on Burning The Bridges To Nowhere. Odium are definitely a band to watch.” – RawNerve Zine

“Odium are very good at what they do, namely melodic Death Metal. This Canadian quintet have a lot going for them…competent and execute the form very well… There are some nice orchestrated atmospheric moments such as at the beginning of ‘Insomina’” – Metal-Rules.com

“Odium posses very distinctive and strong melodic leanings, catchy riffing and undeniable prowess on the performing front – especially with the clean/growl vocal trade-off and the tight rhythm section….cuts like the thrashy “Viral By Nature”, “Within the Distraction” and the title track, perfectly blend with the more expansive sound of “No Way Out” and the melancholic quasi-ballad “The Descent” among others to deliver a decently solid piece of modern Metal. ” – PureGrainAudio.com

“ Right from the opening title track one knows exactly what they’re getting: hard hitting riffs with great rhythm, solid production so everything can be heard, and a dual assault of bellowing snarls with dark and brooding clean vocals that can send shivers down one’s spine…the biggest surprise is the closing “The Descent” which trades the angry, aggressive sound for a soft, almost classical sounding Rock ballad. Here fans get to see the more emotional side that was probably buried in all the screaming, and for new fans it may feel out of place, but one cannot argue that this is the ‘hardest hitting track’ on the album, as it aims right for the heart. Whether one likes Metal or Rock in general, there’s a bit of something here for everyone, as with the entire release of ‘Burning The Bridges To Nowhere.’” – Brutalism.com

“Without a doubt this is one of the better modern melo-death metal albums out this year and the uniqueness within their sound should help to attract new listeners. Album number two is exceptional and now I wait in earnest for their next release. I am sure it’s going to be as stunning as this one is. ” – Blistering.com

“Odium have delivered a strong release with their second album “The Burning Bridges To Nowhere”. Strong melodic riffing leads, strong driving rhythm, strong death vocals along with delicate clean vocals that melt into a great sound garment and make this album interesting. 8/10″ – Metal-Glory.de

“They forge fast and pulsating melodic metal in the vein of In Flames, with biting verses akin to Lamb of God. Vocalist Tom Emmans rips through the tracks, delivering highs, lows and clean singing for the choruses…What sets them apart from other metal bands is their song structure, having uniquely arranged melodies that correspond with stadium and arena-like choruses. Imagine Tool ditching their progressive style and forming a supergroup with Unearth.” - The Link (Concordia University students newspaper – Montreal)

“To be radio satisfactory, a melodic catch has to be present to appeal to the half-distracted listener. That is demonstrated in vocalist Tom Emmans’ clean singing during the album’s choruses. His sound is haunting and pure, like Maynard Keenan, but doesn’t whine. Not every metal vocalist can sing, growl and screech successfully and be aesthetically brutal. This is a key aspect as to why new Odium fans will fawn over them.” – Journal & Courier Daily (West Lafayette, IN)

“The thing with a band like Odium is that they know how to walk that line between full on heavy, thrashed out metal and melody. It’s definitely their style, but they only seem to turn it on where it’s necessary, and that speaks to a much wider audience.” – Juliette Jagger – AlanCross.ca

“Odium are a Canadian band that just released their smoking album “Burning the Bridges to Nowhere”. The band sound like a mix of Killswitch Engage, In Flames and Tool. Unlike most generic metalcore that you hear nowadays, Odium actually have the chops and the hooky songs to make it big. Think metalcore is crap or “false” metal? Listen to “Burning the Bridges to Nowhere” and you will be converted to Odium’s music.” - Scratch The Surface

“Odium’s sophomore release is high on energy and features plenty of “impact is imminent” thrash moments that are easy enough for the listener to latch onto. “Burning The Bridges To Nowhere” is a recommended release.” – Heavy Metal Time Machine

“Playing a familiar form of modern metal that will appeal to fans of Killswitch Engage, All That Remains…” – TeethofTheDivine.com

“Burning the Bridges to Nowhere” has a constant flow and keeps the energy high and octane filled…” – XplosiveMetal.com