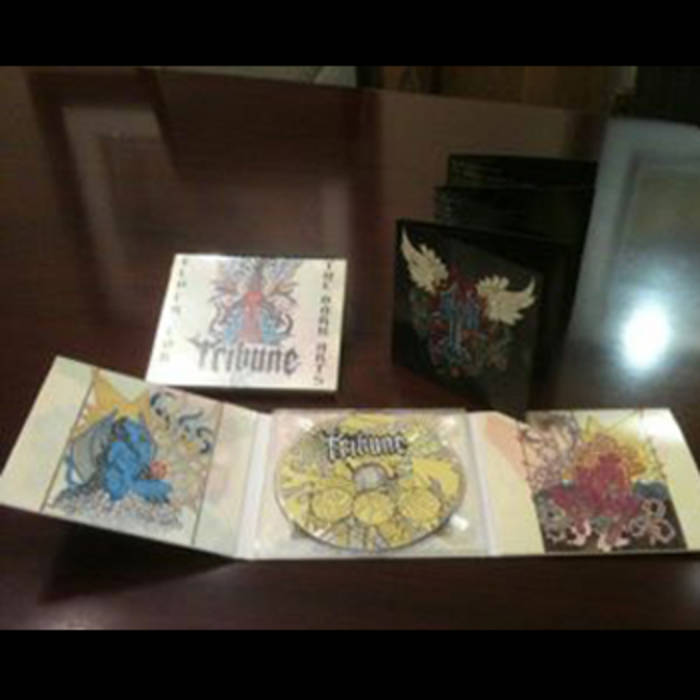 “If prog-infused death/thrash sounds like your thing then wrap this around your ears and don’t stop…” – MetalAsFuck.net

“Tribune prove themselves an imaginative, intelligent and technically proficient band on ‘The Elder Lore – The Dark Arts’; if you’re a Metalhead, you should definitely be listening to this one.” – Confront Magazine 9/10

“The album is a big snack of metal and I like it.” – MetalGlory.de

“the nine minute beast of an ending ‘The World’s Greatest Cynic’, which is like a greatest hits of Tribune’s capabilities in one swoop. ”- Metal-Rules.com

“check out the relentless staccato machine-gun groove of ‘The Succubus’” – Bravewords.com

“In 25 words or less: ‘Prog, Metal, Thrash, Rock, Doom, take your pick, you’ve got it all here…” – MayTheRockBeWithYou.com

“Elder Lore/The Dark Arts is a riff-driven, groovy thrash album with a bit of a melodic death metal/metalcore appeal. The guitars are sharp and bouncy and there’s a good amount of grooves and solos.” – TeethofTheDivine.com

“‘The Warrior Mentality,’ my favorite on the album, shows influences from Black Sabbath and Dream Theater to Iron Maiden and Lamb of God. It’s a very cool, riff oriented song! …The musicianship is extremely skilled-these guys are tight. Production on the album is also a highlight. Very well done. These guys kick ass and will be a force to be reckoned with in the future. “ 4/5 – SkullsnBones.com

“The band has unleashed a powerful new effort entitledElder Lore / The Dark Arts, and it’s sure to gain Tribune a monstrous amount of accolades from all over the globe.” – HighWireDaze.com

“On their second full-length release, “Elder Lore/ The Dark Arts” the band Tribune (who hail from Burnaby, BC.) decided to break into my house, steal all of my heavy metal collection and then craft an album that explored all the various bands I listen to. How else does one explain everything this five piece band throws out to the listener? Classic heavy metal? Check. Thrash? Check. Melodic hardcore? Check. Progressive metal? Check. Death metal? Check. Doom? Check. It is all here and then some.” – Heavy Metal Time Machine

“Tribune is a rarity in 2012: a band whose members have molten metal, and not much else, coursing through their veins. Forget throwing hip-hop, rap-rock, screamo, punk, or hardcore-electro free jazz into the mix: Elder Lore/The Dark Arts is aimed at those who pine for a less complicated time, when Headbangers Ball was must-see TV, and Studebakers on Kingsway was doing booming business.

Tribune not only acquits itself admirably here, but also implies that it knows the metal landscape has shifted since Iron Maiden and Judas Priest were something more than glorified nostalgia acts. What you get is eight songs that suggest a well-stocked iPod on Shuffle—assuming that said iPod is loaded with metal, metal, and more metal, none of it hairspray-scented.” – The Georgia Straight (Vancouver, BC)

“The third release from this Burnaby “thrash/prog rock/metal band” pretty much meets its description. From the growls and frog ribbits that open “It Came From the Swamps,” there is equal parts straight on metal boogie only to break into hyper speed shriek breaks unexpectedly and about three bands in one by song’s end. The group appears to hit its stride most effectively on the full-on thrash of ”The Succubus,” with some particularly tasty vocals. Perhaps my fave track is “The Warrior Mentality” for its pulsing build to tortured screams and then an almost Alice In Chains-ish turn later on. If you favour heavy guitar lead workouts, this isn’t your cuppa. These guys get to the point and drive it home with maximum force and minimum flash. And they really sound like they know their strengths and play to them.” - The Province (Vancouver, BC)

“This is a top quality release;… their arrangements are verging into Mastodon’s playground with a fresher, more honest delivery clearly audible and some of the arrangements are of a quality that I would expect from say someone like Tool, and they are damn perfectionists, hence, Tribune have massive potential. ” – Brutalism.com

“..the best thing about Elder Lore The Dark Arts is the music…traditional foundation and some nice fret work, this album is an interesting listen….clever and appealing …one album to check out.” – DangerDog.com