All Else Fails - This World In Flames 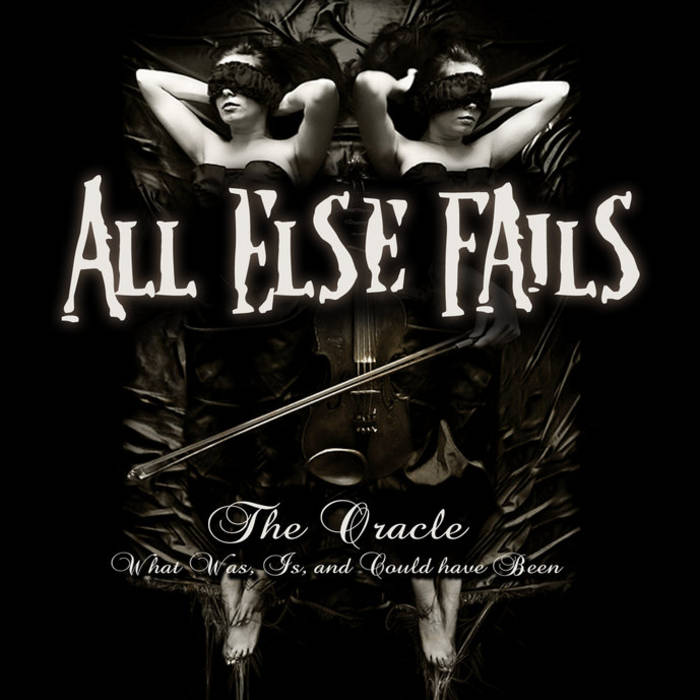 “What is also apparent on this third release is not only the sheer creativity of the group, but also its stone cold knack for writing songs designed to permanently embed in the gray matter…There is just something about the band’s songwriting approach; it seems so darn natural and effortless. On “The Oracle” nothing ever sounds forced, formulaic, or identifiable as anyone but ALL ELSE FAILS. Don’t let this one slip past your radar. “ – Blabbermouth.net

“It would not surprise me in the slightest if you heard this group grace the airwaves from the obscure darkly lit, pubs of Gothenburg to the soundboards of our own local modern rock stations. It seems more than fortunate that these Alberta natives named their album The Oracle because these local talents have clearly seen the future.” – Edmonton Journal

“A Monster of a Metal Opus” – The Edmonton Journal

“The epic twelve track album [The Oracle] explores their most extraordinary sound to date. Ranging in themes from the apocalypse (‘This World In Flames’, ‘Rebirth’) to drug abuse (‘Fallen’), to religious persecution (‘Monster Eats The Pilot’), to being haunted by the sins of one’s past (‘The House At The End of The World’)” – PureGrainAudio.com

“”The Oracle” is a highly addictive journey that captures the listener from start to finish.” – SpazioRock.it (Italy)

“The Oracle is one hell of a powerful album, packed with no end of metal elements, punk edginess and even jazz flourishes . One could make the standard obligatory comparisons to other metal records, but The Oracle defies all traditional categorization. The music is at once darkly visceral and starkly beautiful. In a world of countless “core” clones in the metal scene today, this opus stands out amongst the many. All Else Fails have realized their most compelling yet pulveringing album to date.” – Metalholic Magazine

“For St Albert-based band, All Else Fails, music is not just an end in and of itself, it’s a means to an end. The trio uses its music to ask questions about some of the bigger issues facing the world, without necessarily drawing concrete conclusions. Preferring to provoke debate than provide answers…” – Vue Weekly – Edmonton

“ALL ELSE FAILS is a brand of metal that represents brutality, melody, and freshness that is well captured on The Oracle, What Was, Is And Could Have Been.” WeLoveMetal.com

“…plenty of gems amongst them, including “Twilight Of Mankind,” “Monster Eats The Pilot”, the crushing “Rebirth” and the symphonic/metallic based stand out effort “Obsidian Walls”” – Blistering.com

“All Else Fails have crafted one of the most diverse sounding albums I’ve heard in a while. The Oracle, What Was Is and Could Have Been refuses to be pigeon-holed into a genre, and that’s why it’s great. Rather than sick to a straight formula, All Else Fails branch out into several genres and bring their sound into the fold to produce some incredibly creative songs.” – The Age Of Metal

“When it came down to the track list at hand, I can point a few starlets that mesmerized me. I recommend on “This World In Flames”, both electric and acoustic, bone crushing “Rebirth” and “Obsidian Walls”, “Fallen” was a great treat even though it was lyrically heavy, and I even found the last parody “Robots!!! KOLTG” as cool. In addition to the names of the hits, I urge to take a deep listen to the rest while trying to notice the strong connection between the musical diversities and the strong lyrical sense. ALL ELSE FAILS did more than a fine job on those creations.” – Metal-Temple.com

“The band, out of St. Albert, AB. plays music which brings together classical, progressive and metal elements, to create an orchestral approach to hard driving music” – Yorkton This Week